Leave a comment Posted by Rex Brodie on December 31, 2011

Autodesk released the Beta of their 123D Catch 3D scanning software. I figured I’d take it for a spin. It’s supposed to leverage the “power and speed of cloud computing” by taking a number of pictures shot around an object, uploading (to the cloud!) and processing into a 3D mesh.

Broadband, Social Networks, and Mobility Have Spawned a New Kind of Learner — THE Journal

Leave a comment Posted by Rex Brodie on December 15, 2011

Students are different today because of technology. Every educator knows this, of course, but this change is about much more than agile thumbs, shriveling attention spans, and OMG’d vocabularies. According the Pew Research Center, the combination of widespread access to broadband Internet connectivity, the popularity of social networking, and the near ubiquity of mobile computing is producing a fundamentally new kind of learner, one that is self-directed, better equipped to capture information, more reliant on feedback from peers, more inclined to collaborate, and more oriented toward being their own “nodes of production.”

Broadband, Social Networks, and Mobility Have Spawned a New Kind of Learner — THE Journal.

Leave a comment Posted by Rex Brodie on December 14, 2011 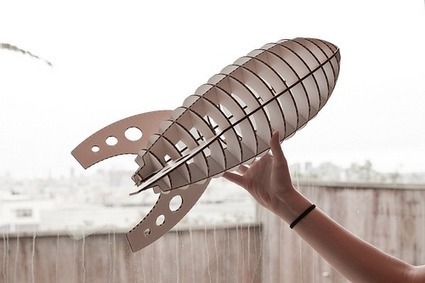 When President Obama delivered his State of the Union speech in January 2011, he spoke of the importance of science and technology research and education to the U.S. — …
Via www.hackeducation.com

Leave a comment Posted by Rex Brodie on December 11, 2011

Much to my good fortune, the sinuous road of my higher education has allowed me to participate in two technological revolutions as a student. While attending UMass in the early 1990s, I studied computer graphics at a time when the digital age was just beginning to take hold. Now, as a student at SCAD, I am learning about the next revolutionary technology: digital fabrication. Still in its infancy, digital fabrication technology has the potential to further dramatically alter our culture. It will not only change our future economy and the employment prospects of our students, it will be an integral part of the changing world view of the next generation.

In a recent article in the online publication Strategy+business, digital fabrication is described as the “new disruptive technology” with a “potentially enormous impact on the business models of today’s manufacturers.” The article goes on to say:

The rapidly evolving field of digital fabrication, which was barely known to most business strategists as recently as early 2010, is beginning to do to manufacturing what the Internet has done to information-based goods and services. Just as video went from a handful of broadcast networks to millions of producers on YouTube within a decade, and music went from record companies to GarageBand and Bandcamp.com, a transition from centralized production to a “maker culture” of dispersed manufacturing innovation is underway today.

Reinforcing the cultural impact of these new technologies, in a recent article entitled In the Next Industrial Revolution, Atoms Are the New Bits Chris Anderson from the magazine Wired summarizes the outlook for the next 10 years:

Transformative change happens when industries democratize, when they’re ripped from the sole domain of companies, governments, and other institutions and handed over to regular folks. The Internet democratized publishing, broadcasting, and communications, and the consequence was a massive increase in the range of both participation and participants in everything digital—the long tail of bits.

Now the same is happening to manufacturing—the long tail of things.

Today, micro-factories make everything from cars to bike components to bespoke furniture in any design you can imagine. The collective potential of a million garage tinkerers is about to be unleashed on the global markets as ideas go straight into production, no financing or tooling required. “Three guys with laptops” used to describe a Web startup. Now it describes a hardware company, too.

In the same manner, experiential learning in the visual arts allows students to envision and create. Fab Labs across the country are providing students with the opportunity to take their ideas from concept to physical form. Originating at the Media lab at MIT, the Fab Lab concept grew out of a popular class at MIT named “How to Make (Almost) Anything.”  By providing students with the new digital fabrication tools to engineer and fabricate their designs, Fab Labs are not only promoting Science, Technology, Engineering, and Mathematics (STEM) education but also ushering in the next world view of the “maker culture” generation.

Computer technology has blurred the traditional divisions in art, science, and engineering to the point that we have begun a new post-disciplinary age.  Digital Fabrication technology will not only continue this trend but will help make the divisions irrelevant. In the near future there will be a 3D printer on every desktop. Everyone will have the ability to inexpensively design and fabricate anything imaginable … everyone will potentially be a designer/maker of our material world.

Given the increasingly visual nature of our culture, it’s difficult to understand the marginalization of the arts and their elimination from the curriculum in some schools. As I mentioned earlier, developing the ability to envision and create are at the core of the art curriculum and the studio habits of mind we are striving to instill in our students. I believe Kerry Freedman correctly asserts in her book Teaching Visual Culture that if we want our students to understand the world in which they live, “curriculum will have to include a greater focus on the impact of visual forms of expression across traditional boundaries of teaching and learning, including boundaries of cultures, disciplines, and artistic forms.”

My hope is that I will have the opportunity to bring new digital fabrication technology to SA this summer. This spring, I plan to assemble a MakerBot Thing-O-Matic 3D printer to use in my MFA thesis show. Upon graduating from SCAD, I would like to bring the 3D printer to SA and design the curriculum for a sculpture class based around the technology.

Leave a comment Posted by Rex Brodie on November 28, 2011

In her article “Connecting Art, Learning, and Creativity: A Case for Curriculum Integration” Julia Marshall delves into the importance of metaphors. She proposes a strategy for teaching art through “substantive integration.” Substantive integration attempts to move beyond “issues-based art education” to reveal the “conceptual connections that underlie art and other disciplines.” She points out that making connections is essential to all learning and understanding and is a “key factor in transfer–the ability to extend what has been learned in one context to new contexts.” Referencing George Lakoff’s definition of metaphor as a “cross-domain mapping in the conceptual system,” Marshall argues that “the mind, in organizing phenomena into categories, thinks analogously; it sees something in terms of something else.” Moreover, she says:

Metaphors begin with analogous thinking when one thing is compared to another. An analogy then serves as a basis for projection, where one thing is seen in terms of another. In metaphor, however, there is not complete accord between the two compared entities. The discord between the two entities challenges the mind to re-conceptualize the original entity and see it differently … dissonance of metaphor shocks us into new analogies.

Like language, visually engaging metaphors created by the artist can play an important role in our understanding of reality. The power of metaphors to convey relevant truths about our postmodern condition lies in their ability to accommodate multiple interpretations.  They not only reinforce the idea that there are no fixed universal truths but also help us to make sense of this fact.

As a way to begin to understand the nature of vision by comparing it to language, I will require students to keep a metaphor log.  On the first day of class, I will have the sculpture students create a blog that will be used to organize and synthesize their thoughts as they construct their definition of art through the artmaking process. In her article, Marshall brilliantly makes the connection between art and science through an analogy between the artmaking process and developing a scientific theory. Like a scientific hypothesis, the “art image” illustrates the artist’s “theory of reality.” Moreover she goes on to say:

Artists are theorists; they question, observe, analyze, synthesize, and hypothesize as scientists do and shape thought into conceptual images, which are often metaphorical … art images manifest an individual artist’s hypothesis or interpretations of reality that resonate with others.

I intend to introduce the blog to students as a method of documenting their artmaking process and developing their hypothesis of the meaning of art. I will ask them to begin by entering their current definition of art/sculpture into their blog/journal on the first day. As the class proceeds, I will ask them to continually reflect and update their “hypothesis” throughout the class.

Extra! Extra! Read All About It!

Mind/Shift How we will learn